GETTING STARTED WITH ROBOTICS

In this post I am going to tell you how to get into the field of Robotics, what one should learn before going to build your first robot of robotics and I am going to suggest some useful pdf files  at the end of each topic which will help you  learn deeper on topics like Introduction to Robotics, Getting started with  Electronic (useful in Robotics), Getting started with Arduino (Micro controller for Robotics) etc.,

When we hear the word ‘Robot’ we generally assumes a human like structure made up of metal some thing like in the picture. but  it is one of the types of robots called Humanoid Robot.

So what is a robot?

A Robot is a goal oriented Electromechanical device that can sense, plan and act.

Recommended pdf file for getting started with robotics is below
Introduction to Robotics.pdf

What one should need to learn before building the first Robot?
As we know that Robot is a Electromechanical Device which implements the program(Software) so, before building your first Robot it is better to know the basics in these three fields (Mechanics, Electronics and Software).
In the field of Mechanics we have to concentrate on the topics like Dynamics, Kinetics and Inverse Kinetics etc.,
In the field of Electronics we have to know about some basic Electrical components like Resistor's, Diode's, Transistor's, FET's, UJT's, Capacitor's, Inductor's etc., and their application and calculations in the circuitry.

Recommended pdf file to learn about basic Electronic components is below -
Getting started in electronics by -   Forrest M. Mims III

In the field of Software(programming) it is advisable to learn at least basics of  'C' Language  to start programming the robot because, popular Micro controllers like Arduino, PIC etc., are programmed in the language which is similar to 'C' Language.
It is always advisable to gather the basic knowledge before entering into any field so, before building the first robot it is better to have some basic knowledge about different types of components used to built a robot. Some basic components/things required to built a robot are - Micro controller, Sensors, Motors, wheels, Software etc.,

Arduino is an open-source Electronics prototyping platform based on easy to use hardware
and software. The Micro controller on the board is programmed using Arduino programming language
(Similar to 'C' language) using the Arduino Integrated Development Environment (IDE). The Arduino
can compatible with other softwares like Flash, Processing, MaxMSP. MatLab provides a special tool
to interact with Arduino.
The following is the picture of Arduino uno Micro controller.

I think for the beginners Arduino Micro controller is the best(If you are familiar with C
programming). The reasons are -
1) It has a large community over the Internet to help us
2) It is a Open source device.
3) Easy to program using  the Arduino IDE.
4) It is easily available at any embedded store.
5) Relatively less price.

PIC Micro controllers are popular among Industrial Developers and hobbyists due to
their low cost, wide availability, large user base, extensive collection of application notes, availability of
low cost or free development tools, and serial programming (and re-programming with flash memory)
capability. They are also commonly used in educational programming as they often come with the easy
to use 'pic logicator' software

Human beings sense the world with our sense organs like eyes, nose, ears, tongue and skin. but, what about Robot?
Robot need sensors to sense the world around it. Some of  widely used sensors in the field of Robotics are IR LED's, Photo Resistors, IR range finders, Ultrasonic range finders, Temperature sensors, PIR Motion detection sensors, VGA sensor(VGA Camera) etc., The following is the detailed description of above mentioned Sensors

IR LED means Infrared Light Emitting Diode. The IR LED emits
Infrared light which is not visible to human eye. we can find these IR LED's in
our TV Remotes. IR LED's works like normal LED's but the material used in
the core is different, it emits Infrared Light when current passed through it (in
case of IR LED). These IR LED are used to detect obstacles ahead of the
robot. The IR LED emits IR light which gets reflected if any obstacle is present
in the direction on emitted IR ray, the reflected IR ray caught by Photo diode which
calculates the reflected light strength. The higher the reflected IR  ray strength the
closer is the obstacle and vice-verse

The name itself indicates that this sensor is used to sense the
temperature. This sensor has three legs like a Transistor, one leg is Vin second
one is Vout and the third one is Ground. we have to supply the voltage to Vin
and Ground and take the output voltage at Vout which tells us the temperature in
terms of voltage.

The Ultrasonic Distance Measuring sensor (Transducer) works
on the principle similar to Radar but, this sensor uses ultrasonic (high
frequency) sound waves instead of radio waves. This sensor has two
cylindrical shaped objects one sends the ultrasonic waves and the other
receives the echo generated after striking an obstacle. The delay
between the source signal and echo signal will determines the distance
at which the object is presented higher is the delay higher is the
distance of the obstacle and vice-verse.

IR Range Finder (IR Distance Measuring Sensor) is a sensor
used to find the distance of an object from where it is placed. The IR
Range Finder has an IR Source (IR LED) and IR Receiver

(Photo diode). The IR Source sends the IR rays and the IR receiver
receives the IR rays which get reflected by any obstacle. The
difference between IR Rang Finder and Ultrasonic Transducer is IR
Range Finder uses IR rays but Ultrasonic Transducer uses high
frequency sound waves. IR Range Finder is more accurate in indoor
but it may give false readings at outdoor because the IR rays from sun
may be detected along with the reflected IR rays from an obstacle

PIR sensor means Passive Infrared sensor. It is used to
detect any motion/moment. It is widely used for security purpose and
robotics. It works from a voltage range of 3.3 V to 5 V and
produces the output in terms of voltage which can be directly
connected to Micro controller or to a Relay through a Transistor. It
is generally used to detect any motion in front of it .Most PIR sensors
have a range of 120 degrees.

A motors is a Electromechanical device that converts Electrical energy into rotational Torque. The hierarchy of the motors are divided into two types A.C (Alternate Current) motors and D.C (Direct Current) motors. In general we use D.C motors in the field of robotics.so let us ignore the A.C motors for now and concentrate on D.C motors.
The D.C motors are divided into several types based on several factors. The different types of D.C motors are - Brushed D.C motor, Brush less D.C motor, Servo motor, Stepper motors etc.,
let us see detailed description about different types of D.C motors used in the field of robotics - 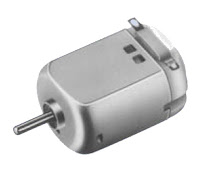 Brush less D.C Motors (BLDC motors) also known
as Electrically commutated motors. These motors are
powered by D.C source through an integrated inventor
which generates A.C signals (not sinusoidal but bi-
directional) to drive the motor. We can't drive a Brush less
D.C Motor directly with a battery. To operate the BLDC
motor we need special circuitry. BLDC motors has 3 wires.
The BLDC motors are designed to over come the disadvantages
of Brushed D.C motors. The BLDC motors have  Higher efficiency,
less susceptibility and low mechanical wear and tear. You can find
these BLDC motors inside the DVD Drive of our Computer. 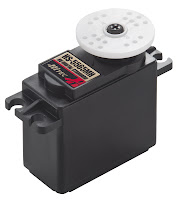 Servo Motor is a rotatory actuator with a precise control
of angular position i.e., with the help of this motors we can
control the rotor of the motor to the desired position (angle).
Unlike normal motors Servo Motors cannot rotate continuously.
Most of the Servo motors have a rotational range of 180
degrees some Servos has a range of 120 degrees some Servos
can has a range of 90 degrees. To operate these Servos to a
particular position we need Pulse Width Modulation (PWM)
signal. The Servo Motor use the feedback from a Potentiometer
(POT) inside the servo to turn its rotor to the desired motor.
There is a built in circuitry in the motor so, we do not need to
construct extra circuitry. The servo motors has three wires one is
Vin the second is Ground the third wire is for the control signal
which determines the position of the rotor. There are a wide range of
Servos available depending up on Torque, size etc., 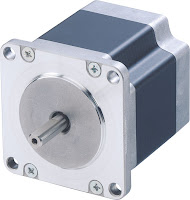 A Stepper Motor is a Brush less D.C electric motor
that divides the full rotation into number of equal steps. The
motors position can be commanded to move and hold at one
of these steps with out any feedback sensor.These Stepper
Motors are useful when we need precise control of angular
position with out any restriction of limited rotation like Servos.
These motors are expensive. Most of the Stepper motors
have 200 steps per rotation. we need a Stepper Motor Driver
circuit to drive this motor

A Motor Shield is nothing but circuitry to drive the Motors. Direct connection of Motors to the Micro controller is not advisable.
The reasons are –
1) The induction coils in the motor may produce high voltage spikes which may damage the Micro controller
2) Micro Controllers Output pin produces 5 V and nearly 50 Milli amps of current which is not sufficient to run large motors.
So, we need some circuitry like H-Bridge and Motor Shields.Below is the picture of a Motor Shield.

A wheel is a circular component that is intended to rotate on a axial. To make a mobile(free to move) robot we needs wheels. For un-even surfaces Track belts may be useful. we can find these Track belt system in military tanks.
The following are the pictures of Wheels and Track.

If you want to give or take any suggestions or express something about this post please feel free to comment.
Posted by Kranthi at 11:58

Email ThisBlogThis!Share to TwitterShare to FacebookShare to Pinterest
Labels: getting into the field of robotics