In this tutorial I am going to post the step-by-step procedure to make a simple Object Tracking Bot. The main aim of this Bot is to follow the objects which are shown to it in 3D space i.e., x, y and z – axis (horizontal, vertical and forward & backward). This bot behaves just like a little doggy. This bot tracks the objects with 2 DOF (Degree Of Freedom). The two motors provide the Horizontal, Forward and backward movement, The Servo Motor which holds the Compound Eye (Sensor) provides the Vertical movement. So, the Bot can follow the Object in 3D space. To sense the objects and track it this bot uses an IR Compound Eye sensor, which is built using four 5mm IR LED’s and eight 5mm Photodiodes. You can find the performance of the Object Tracking Bot from the below YouTube link

Step-1: Acquire required Materials
Before start building the bot gather the required materials and tools. The list of materials and tools required are as follows –
After gathering all the required materials and tools let’s move on to next step.
Step-2: Making of Compound Eye (sensor) –
The Compound Eye sensor used in this bot is built using four IR LED’s and eight Photodiodes. The idea and design of the compound eye sensor was taken from ……………………….. Here is the link to his site ………….. . You can buy this sensor from Stores or make it yourself. From the reference of above site I had made a similar sensor with some modifications, the circuit I had used for my sensor is different from the original one and I had used Photodiodes instead of Phototransistors.
The circuit diagram of my (modified) sensor is below –

Step-3: Motor driver –
The L239D is a motor driver IC which is used to control two DC motors with the help of four PWM pins of Arduino (you can use 4 Digital I/O pins instead of PWM pins if you don’t want to control the speed of motors). Don’t connect the motors directly to Microcontroller the sharp spikes (inverse EMF) from the motor may damage the Arduino. The L239D IC has 16 legs. The connections of L239D with Arduino and DC Motors are shown in the below picture.

Solder the IC on a Universal PCB. Then Connect the two Motors to 2,7 and 10,15 Pins of the IC. Don’t connect the IC to Arduino now. Connect them during the Assembling step.

In this post I am going to show you the step-by-step procedure to make your own home made sun tracker. Before going to do that let me give a brief description on what is a sun tracker and what are its advantage.

What is a Sun Tracker?

A sun tracker is a automatic platform for solar panel which always turns its face towards the sun throughout the day like a sun flower by using some photo sensors like Photoresistors.
Read more »
Posted by Kranthi at 16:19 22 comments:

How to Make an Obstacle Avoiding Robot

In this post I am going to write the step-by-step procedure to build an obstacle avoiding Robot. I want to keep the cost of this Robot as low as possible so, I am going to use cheap and easily available Sensors like IR LED and Photodiode pair to detect the obstacles instead of expensive sensors like Sharp IR range finder or Ultrasonic transducer. Even though I am using the inexpensive sensors instead of expensive one the performance of the robot is good, you can find how it works from the below You tube vedio –

How to Use IR LED and Photodiode with Arduino

IR LED means Infrared Light Emitting Diode. The IR LED emits Infrared light which is not visible to human eye. we can find these IR LED's in our TV Remotes. IR LED's works like normal LED's but the material used in the core is different, it emits Infrared Light when current passed through it. These IR LED are used to detect obstacles ahead of the robot. The IR LED emits IR light which gets reflected if any obstacle is present in the direction of emitted IR ray, the reflected IR ray caught by Photodiode which calculates the reflected light strength. The higher the reflected IR
ray strength, the closer is the obstacle and vice-verse 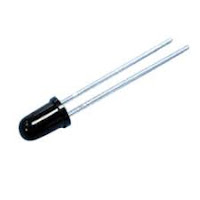 Photodiode is a light sensitive semi-conductor diode which converts the light energy into voltage or current based on the mode of operation. In general Photodiodes are operated in reverse bias condition. The clear Photodiode can detect visible and IR rays to limit the Photodiode to detect only IR rays a black cotting is applied to the glass of the Photodiode. The photodiode allows the current to pass through it if the photodiode is exposed to IR rays and it doesn't allow current to pass through it if no IR rays falls on it. The amount of current passed through the photodiode is directly proportional to amount of IR rays falls on it.

In my previous post Getting Started with Robotics we have seen a brief introduction about basic sensors used in the field of Robotics. In this post I am going to write How to use these sensors i.e., application of these sensors in the field of Robotics with circuit diagram and programming code of Arduino Microcontroller.In this post I will show you how to use and program Temperature sensor and Photoresistor

Before entering into the project's, let us have a look at the Arduino UNO board. The Arduino UNO Microcontroller is based on ATmega328. It has 14 digital input/output pins numbered from 0 to 13. In these 14 pins we have 6 PWM pins (Pulse Width Modulation outputs). Arduino uno has 6 analog input pins numbered from A0 to A5. The analog pins maps the input voltage between 0 and 5 Volts into integer values between 0 and 1023. You can learn more about Arduino in the official Arduino website http://www.arduino.cc.