In my previous post Getting Started with Robotics we have seen a brief introduction about basic sensors used in the field of Robotics. In this post I am going to write How to use these sensors i.e., application of these sensors in the field of Robotics with circuit diagram and programming code of Arduino Microcontroller.In this post I will show you how to use and program Temperature sensor and Photoresistor

Before entering into the project's, let us have a look at the Arduino UNO board. The Arduino UNO Microcontroller is based on ATmega328. It has 14 digital input/output pins numbered from 0 to 13. In these 14 pins we have 6 PWM pins (Pulse Width Modulation outputs). Arduino uno has 6 analog input pins numbered from A0 to A5. The analog pins maps the input voltage between 0 and 5 Volts into integer values between 0 and 1023. You can learn more about Arduino in the official Arduino website http://www.arduino.cc.

The name itself indicates that this sensor is used to sense the temperature. This sensor has three legs like a Transistor, first leg is Vin second one is Vout and the third one is Ground. we have to supply the voltage to Vin and Ground and take the output voltage at Vout which tells us the temperature in terms of voltage. 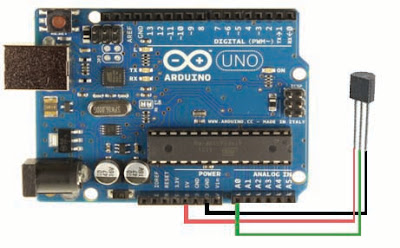 The code starts with the initialisation of variable like 'temp' which is used to read the integer value from the Analog pin and the 'senPin' variable is set to 0 which indicates the temperature sensor connected to Analog pin 0. In the 'void setup()' method Serial port is initialised with a default baund rate of 9600. The 'void loop()' method is used to execute the body inside this method continuously. In the 'void loop()' method the variable 'temp' reads the data from the Analog pin 0, the next step is conversion of analog data to temperature. The 'Serial.print((byte)degC)' method writes the temperature (which is measured in previous step) in the Serial monitor after type casting. The 'delay(1000)' method holds the execution process for 1000 milli seconds (or) 1 second

If you have any trouble related to the code of any thing please feel free to comment. 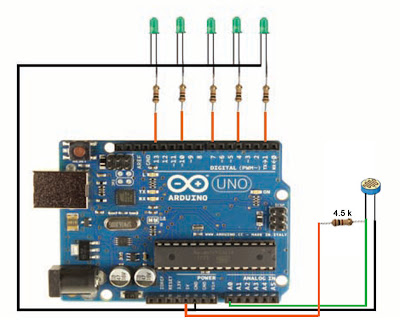 How it the circuit works:

If you have any problem related to the code or any thing please feel free to comment.

Related posts:
1) How to use and program IR LED and Photodiode pair with Arduino

2) Getting Started with Robotics - This post is for those people who want to get into the field of Robotics but don't know How to start. You can find some useful pdf files also.